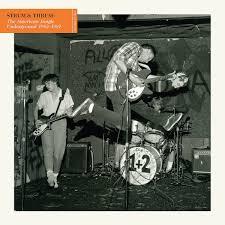 Strum & Thrum: The American Jangle Underground 1983-1987 is the first volume of Captured Tracks' new venture into compilations. Inspired by "Pebbles", "Killed By Death", Soul Jazz and Numero Group compilations, "Excavations" is a series dedicated to compiling forgotten music from the 1970s-1990s that has a connection to Captured Tracks' sound and aesthetic. Much like the Cleaners From Venus, The Wake, and Saäda Bonaire reissues, the "Excavations" releases will bridge the past to Captured Tracks' current roster and showcase the kinds of sounds that inspire them. Outside of bands like R.E.M., the Rain Parade, the Dream Syndicate, and a few others, most US based indie rock received little attention from national or international press outlets and markets - unless they opted for a "big ???80s" sound and signed to a major. The acts on this compilation are the antithesis of that, with a true DiY spirit that lead many of these bands to self-record and self-release within tiny local scenes in small cities and college towns across America.