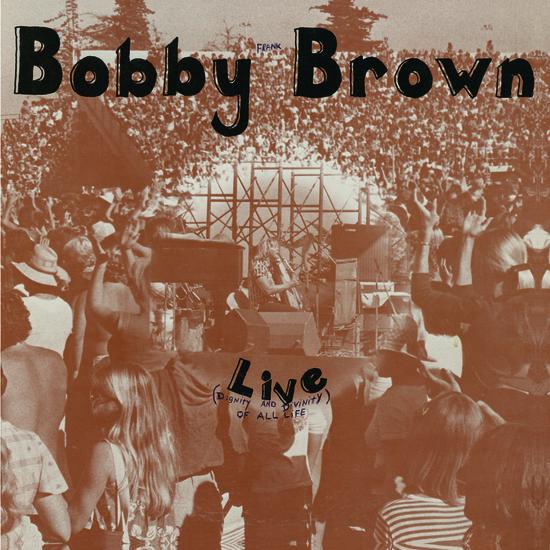 Light In The Attic is distributing another album, that played a part in the evolution of music. Bobby Frank Brown Live (Divinity And Dignity Of All Life), is his second recording. It followed his legendary, The Enlightening Beam Of Axonda, which is considered by many, as the holy grail of rare psych albums. To be more portable, he rebuilt most of the 50 or so pioneering instruments he used for Axonda. His first performance with his new instruments, at UC Davis, went amazingly well. David Dowd wrote ???A one man phenomenon, with an incredible voice.???. Another article in that university paper said the Axonda album, ???told its truths, better than wading through volumes of Plato, Kant, and Shopenhauer.??? With his new smaller creations, he decided to put off going back to LA, and a certain major record deal. He started playing flea markets, and selling his albums. That worked super, an he loved the freedom. It was the beginning of one of the first successful Indie labels. One reason he left LA, David Geffen put Bobbys manager, Chuck Plotkin, as head A&R of Asylum Records. Bobby wanted to get back with Chuck when the time was right. Chuck produced Springsteen projects, then Dylan, an then several top film scores. Bobby just loved traveling, playing street music, hitch hiking, and living like a hobo. Sometimes sleeping in bushes, but mostly staying with people that bought his albums. His first paid singing job was in Haiti. Also he worked as a first mate sailing the Caribbean. Bobby wants to co-produce a Rock album with Chuck some day.

This Live album he used instruments he played in the South Pacific. He opened a Fleetwood Mac, and Kenny Logins concert, in the stadium at UC Santa Barbara. For this Live album, to get a high quality sound, he decided to record those songs in his van, with just his dog for an audience. He could have used the first high quality loop pedal, built for him by Ed Haas. But as he did in the last half of the Axonda album, it was hands an feet a goin. At that stadium concert, when he turned on his pioneering deep base electronic beats, the crowd let out a big whoa. Those electronic rhythms are very common in music now. On albums 4-7 he will play his many percussion instruments over them. Larry Finley master drummer said ???Bobby has incredible rhythm, it???s uncanny.??? He used that to win many dance contests up and down California, Wolfman Jack judged one in Hollywood, an likely would have helped Bobby ounce signed to a record label. Where ever he played, looking at comments by some people that saw him live, they felt love, an great affection for hime. Even with his new smaller set of instruments, on this Live album. Seeing Axonda live was a very deep spiritual experience for many. His new physics ideas were totally new. After a performance at The Troubador, Chuck Plotkin pointed out, ???They didn???t understand the words, but what they loved, what they related to, was the vibe.??? The Axonda album is considered by many, as the first pioneering recording, for new age healing music. This Live album, his second, could fit right in at a rock, country, or folk concert. Especially at earth day concerts. Bobby ad libs a lot, an jazz audiences would love it. Actually because of the creativity, an immense talent, he would likely go over very well with most any audience, even in church.

Did Bobby influence many musicians to play with electronic sounds, oh yea! And world music got a boost from his altered home made musical instruments, and the unique way he played them. These songs are about his immense love of animals, an peace, with comments to preserve the environment. Many environmental concerns expressed in music back then, were a bit of a rarity. He traveled the US in a van with his dog. He loved his dog dearly. He called her mom, since the time she had puppies in his van. One song about his little friend is an instrumental, in a classical music style. Utilizing a computer in a new way, being able to expand his reach as a one man orchestra.

Bette-Joan Rac acclaimed classical pianist, now teaching performance an musical history, through the University of Toronto Royal Academy of Music, is finishing a book. In ???The da Vinci Of Our Time, she says ???I felt Bobby should be known as classical musics 5th B. I was very glad Ed Pinset of London???s Sound Projector Magazine, picked him as one of the 4 American Monster Geniuses Of Avant-Garde Music. On the front cover of the book Valis, Rolling Stone Magazine said Philip K. Dick is ???THE MOST BRILLIANT SF MIND ON ANY PLANET.??? Some are blogging Bobby???s 1972 Axonda album is exactly like Valis, which was published in 1981. Actually Bobby had predicted much of it as a boy, an went far beyond Valis. Brown even predicted what the next physics will be, an how it will produce The Enlightening beam Of Axonda. I think he???s one of the most important musicians, and visionary thinkers of today.