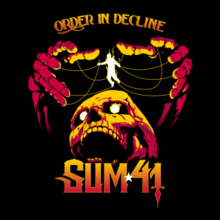 Grammy nominated rock band Sum 41 is back and bigger than ever with their seventh studio album Order In Decline. Written, produced, mixed, and engineered by frontman Deryck Whibley, Order In Decline is a burst of uninhibited feeling, a page out of his journal, a window into his soul that reflects on extremely personal and vulnerable events. The album is undoubtedly Sum 41???s heaviest and most aggressive album in their storied career, while also being its most dynamic and raw. For Fans Of: The Used, The Offspring, Blink 182, Good Charlotte Touring Highlights: Headlining the ???No Personal Space??? tour from April to May of 2019. Also on the Rockstar Energy Disrupt Festival lineup from June to July of 2019. Playing Toronto, headlining at Echo Beach on August 08th and playing Rock La Cauze Festival in Victoriaville, QC on August 10th. First single ???Out For Blood??? being worked on by RPM Promotions in Canada for Radio at Active Rock and Alternative stations.