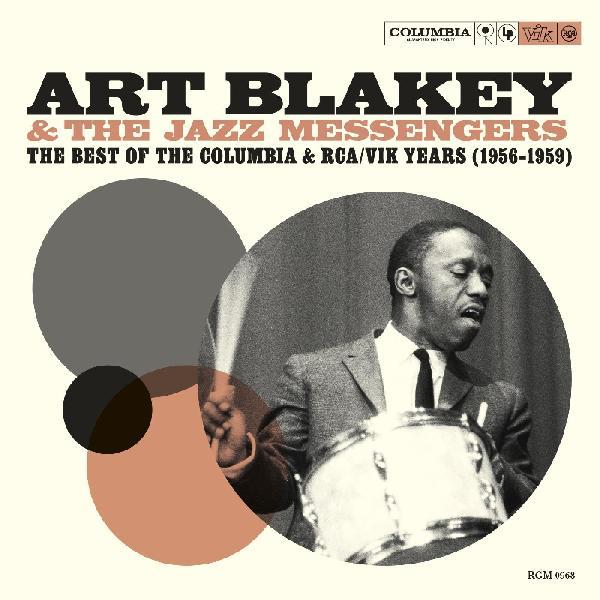 Art Blakey???s Jazz Messengers were the greatest incubator of talent the jazz world has ever known, and the late-???50s were arguably the outfit???s most fertile period, as Blakey led not one, not two, not three, but four aggregations that spawned the next generation of jazz superstars. While Blakey recorded for a number of labels during that period, his sessions for the Columbia and RCA/Vik labels formed the core of his repertoire along with his Blue Note sides, and this 2-CD, 17-track set throws in six rare live performances in France (led by Blakey???s impossibly polyrhythmic playing, the Jazz Messengers were one of the greatest live bands in jazz history) to create an crucial document of the era.

The set begins with three tracks from the 1956 Columbia album The Jazz Messengers featuring the jaw-dropping line-up of Blakey, Donald Byrd on trumpet, Hank Mobley on tenor, Horace Silver on piano, and Doug Watkins on bass; two Horace Silver compositions, ???Nica???s Dream??? and ???Ecaroh,??? join the Tin Pan Alley song ???The End of a Love Affair.??? After that album, Silver split and took Byrd, Mobley, and Watkins with him, but Blakey turned around and hired soon-to-be-legendary alto saxman Jackie McLean along with trumpeter Bill Hardman, pianist Sam Dockery, and bassist Jimmy ???Spanky??? DeBrest to replace them. This unit recorded the next three tracks including the McLean composition ???Little Melonae.??? ???The Sacrifice??? and ???Cubano Chant??? hail from album sessions with The Art Blakey Percussion Ensemble featuring, among others, bassist Oscar Pettiford and pianist Ray Bryant, while the last two tracks on Disc One, ???Almost Like Being in Love??? and ???Couldn???t It Be You,??? add tenor titan Johnny Griffin to the Jazz Messenger mix. Disc Two gets off to a showstopping start with Blakey???s first-ever recording of Dizzy Gillespie???s ???A Night in Tunisia??? (the title track of his 1957 Vik album, Blakey recorded it commercially 11 times) with the Blakey/DeBrest/Dockery/Griffin/Hardman/McLean line-up???a historic track, to say the least! Then, we get a series of little-known live performances from France that introduce the third and fourth of the great Jazz Messenger rosters to appear on this collection. First, we get the one that appeared on the classic Blue Note album Moanin??? album with saxophonist-composer Benny Golson, a young Lee Morgan on trumpet, Bobby Timmons on piano, and Jymie Merritt on bass. That???s the line-up you hear playing the Moanin??? tunes ???Moanin??? with Hazel,??? ???Blues March,??? and ???Along Came Betty??? (retitled ???Along Came Manon??? here) before the album had been released, along with the Monk track ???Evidence.??? Then, the last two tracks usher in the fourth and final great Jazz Messenger line-up heard here, with Wayne Shorter replacing Benny Golson and Walter Davis, Jr. replacing Bobby Timmons on ???Lester Left Town??? and ???A Night in Tunisia,??? bringing the proceedings to a most satisfying (and intense!) conclusion. Compiled and annotated by Grammy Award-winning jazz record producer/executive/archivist/historian Richard Seidel, remastered at Maria Triana at Battery Studios, and featuring prime period photos, The Best of the Columbia & RCA/Vik Years (1956-1959) represents an essential addition to the Art Blakey discography.