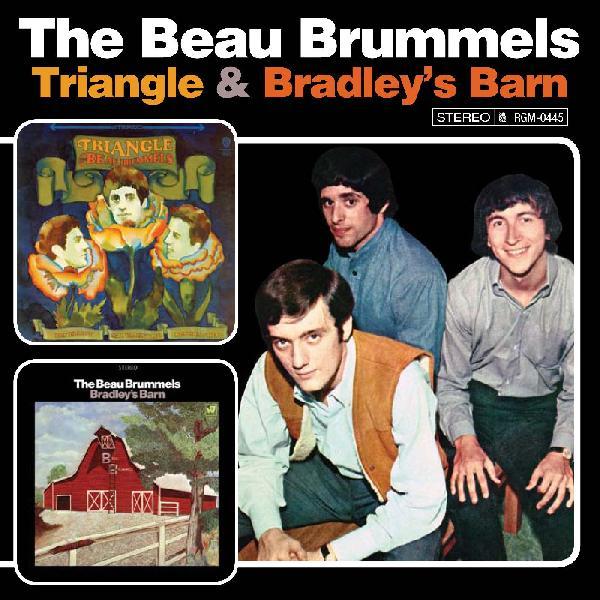 "While San Francisco's Beau Brummels are best known to casual fans for the British Invasion-style hits "Laugh, Laugh" and "Just a Little," the two albums they cut for Warner Bros. with producer Lenny Waronker, Triangle and Bradley's Barn, remain their most artistically ambitious and critically acclaimed records, and continue to exert an influence on modern-day rockers well beyond their modest commercial success. The group was at a low point when they recorded Triangle; they were fresh off the debacle of Beau Brummels '66, the album of covers that was their ill-conceived Warner debut, and the original quintet had shrunk down to a trio of vocalist Sal Valentino, guitarist and principal songwriter Ron Elliott, and bassist Ron Meagher. But with Waronker as producer, the band was for the first time given the freedom to craft a coherent project from beginning to end, with help from some creative sidemen like Van Dyke Parks; the result was a moody, mysterious masterpiece that spoke to the psychedelic spirit of 1967 yet stood apart from it with such ethereal songs as "Magic Hollow" and "Painter of Women." Triangle also had hints of the newly emerging country rock style, and for 1968's Bradley's Barn, the Beau Brummels (now just consisting of Valentino and Elliott with Meagher off to the military) went to Nashville to record with such crack Music City session men as Jerry Reed, David Briggs, Norbert Putnam, and Kenneth Buttrey. Unfortunately, Bradley's Barn met the same fate as Triangle, scoring big with critics but not with audiences; today, however, highlighted by such twangy tunes as "Loneliest Man in Town" and "Long Walking Down to Misery," it's reckoned as a country rock landmark and a true alt-country precursor. Real Gone Music is proud to present these two classic albums together on one CD for the first time, complete with Richie Unterberger's liner notes featuring quotes from songwriter Ron Elliott. Essential listening from perhaps the most underrated band of the '60s."